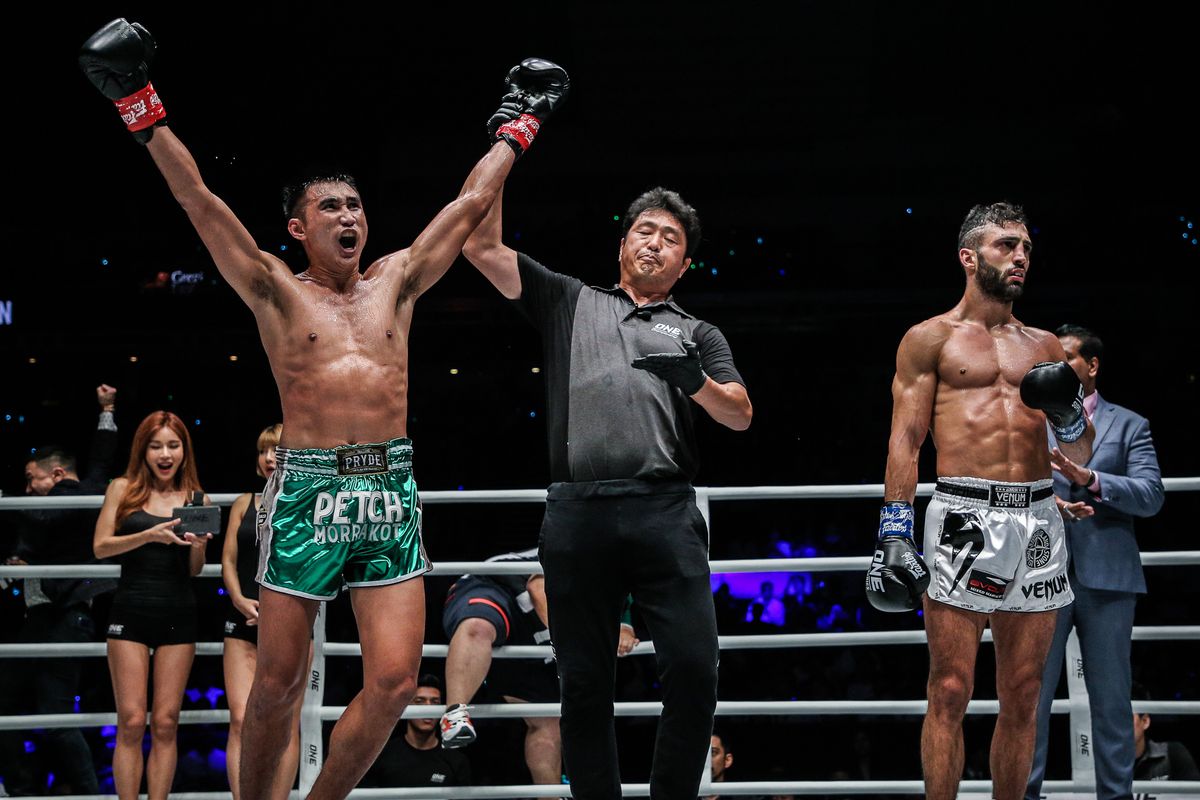 On the 12th July, the world will see the rematch between Giorgio “The Doctor” Petrosyan and Petchmorakot Petchyindee after their last match ended in controversy. Originally, Petchmorakot was declared the winner by decision, however this was later overturned making the bout a no contest. As the fight was the quarter-final for ONE Championship’s featherweight kickboxing grand Prix, the rematch has to take place.

Whilst Petchmorakot was expected to make his way to the semi-finals of the tournament, the decision was made to overrule the bout result. The explanation given was that Petchmorakot had violated the clinch rules during the bout and that the referee had not taken appropriate action resulting in an unfair result.

The rule set allows fighter to clinch for up to 3 seconds and utilise knee strikes after which they must break or be separated by the referee. This excuse does not seem to hold water, especially when the video evidence shows that the rule was not violated in the first place. Once again, the incessant debate on how knees within a clinch are scored in a kickboxing vs a fight under Thai rules has come to the fore. It is unlikely there will ever be a consensus on this topic, nearly all judges decisions will differ from what some portion of the audience think is correct. Especially when the bout is as closely contested as the one currently being discussed.

What is slightly disturbing is how the CEO of ONE, Chatri Sityodtong, personally intervened, voicing his opinion that Petrosyan should have won the bout. This resulted in ONE overturning the decision, after the subsequent inquiry. It does seem quite unsustainable to keep ordering rematches whenever your CEO decides they aren’t happy with the result no matter what star power Petrosyan brings to the tournament. The cynics amongst us might dare suggest that ONE are trying to retain the biggest names in the tournament after Yodsanklai was soundly beaten by Samy Sana.

Typically, Petrosyan fights start relatively slowly with the Italian taking much of the first round to feel out his opponent. The Doctor relies heavily on his teeps and feint teeps coupled with jabs and the occasional left straight. In this time, it gives him an opportunity to remove an opponent’s favoured weapons and exploit any weaknesses he discovers. This is how Petrosyan will often look totally different based on the opponent he faces once the first round is over.

Since coming to ONE, Petrosyan has adopted a much more aggressive style, forsaking the typical feeling out process. In particular, Petrosyan’s left straight and right hook combinations have proved a powerful weapon. This style proved effective with the Italian soundly beating Sorgraw, a former Lumpinee Stadium Champion.

However, this more aggressive style has its pitfalls. For instance, the increased value placed on powerful hooks and crossed means that Petrosyan can occasionally put himself in a compromising position. In the first round of his bout with Petchmorakot, Petrosyan throws a hard hook which misses, the momentum carrying him forward and out of position. This forced Petrosyan to lean deep to one side and scramble out of the way of Petchmorakot’s counter.

The bout started with Petrosyan taking control. Walking down the Thai and delivering hard low kicks and boxing combinations. Petrosyan favoured the left straight or a more looping version of the punch to try and catch Petchmorakot as he circled away. Nobody can deny it was strong opening which must have resulted in the Italian taking an early lead.

The second round saw Petchmorakot begin to take the fight to Petrosyan. This included turning some of Petrosyan’s favourite weapons against him. For example, Petrosyan often employs a jab to cross combination. Whilst one of the most basic boxing combinations, Petrosyan will often employ a deep lean to his right when throwing the cross. This allows him to duck under any incoming hook and keeps his head off the centre line. Petchmorakot was able to mimic this and scored a number of crosses, bruising Petrosyan a rarity in itself.

The second round also saw Petchmorakot step up the clinch aspect. Smothering the forward aggression of his opponent and scoring with knee strikes. Preventing Petrosyan from getting into his stride and opening up barrages of punches.

By the third round, Petchmorakot appeared to have the timing of Petrosyan down. Whenever the Italian leant back for a check hook to cross counter, Petchmorakot would simply back off. Likewise any forward aggression by Petrosyan was met by a clinch exchange with Petchmorakot coming off the victor in these exchanges. Whenever Petrosyan started to throw these aggressive boxing combinations, the lunging long stance meant he was in no position to throw off the clinch.

This combined into Petchmorakot being declared the winner, resulting in the second upset of the tournament.

Regardless of who wins the bout, ONE will be under fire. Either Petrosyan wins and people will complain that he should not be given second chances based on his and the CEO of the company’s opinion and star power. Else if Petchmorakot wins, he has been forced to fight twice for his spot in the semi-finals against one of the best kickboxers in the world whilst everyone else fought a single time.

It appears to be a lose-lose situation for the company in terms of reputation and mainly appears to be a way for them to usher the touted pound for pound king to a championship belt. So much for the honour and integrity that is often lauded as ONE Championship’s fundamentals.

It will be an uphill battle for Petchmorakot, the clinch will be heavily controlled (despite there being no violation beforehand) and it not unreasonable to assume the judges will have it impressed upon them how scoring knees within a clinch does not count for as much as under Thai rules.

That being said, the clinch is still not totally outlawed. Should Petrosyan try to be the agressor, Petchmorakot can still use it to smother it. Even if the knees are not as significant scoring wise, stopping the Italian from getting into his stride is nearly as important. In addition, Petchmorakot appears to have some reach on the Italian, using simple straight combination such as the jab cross we examined landed clean. The Thai would do well to keep the Italian guessing, clinching followed by short combinations then clinch again. Not the prettiest perhaps but why risk losing because you wanted an aesthetically pleasing fight?

As for Petrosyan, number one would be to stop overextending during the boxing exchanges. This leaves him open to the clinch as his momentum is often far past his base. It would do him good to slow the pace of the fight down as he used to and try to pick Petchmorakot apart rather than trying to finish him with power salvoes. The low kick also worked well early in the fight, starting there would be a good way to try and pick apart the tricky opposition he faces.

Regardless of whether this rematch should or should not occur, it is happening. And despite the dissent which will come no matter what the result, it will be extremely interesting to see what adjustments both fighters make and whether Petchmorakot can make it 2 – 0 against the Doctor.