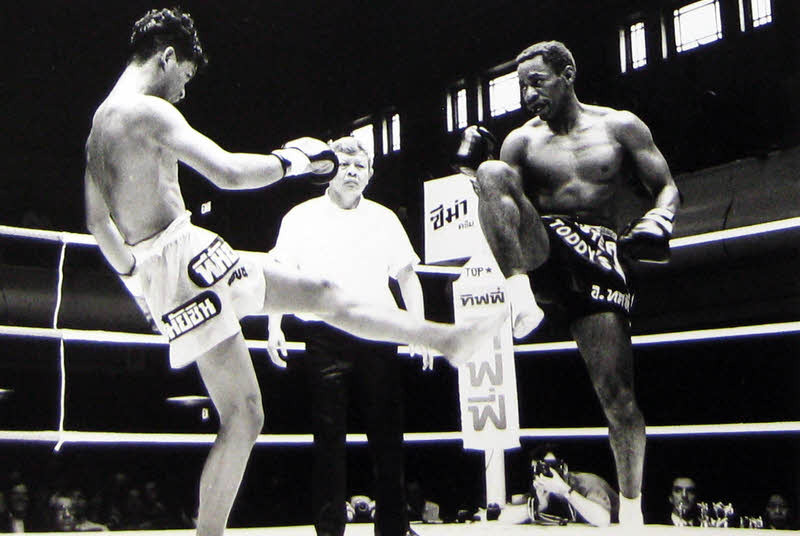 Like every combat sport, Muay Thai has a long-established history of champions. Fighters who were able to best the elite of their era. Anybody who is familiar Muay Thai will be familiar with many of the names from the “Golden Era of Thai Boxing”. Men like Samart Payakaroon, Ramon Dekkers and Sagat Petchyindee who carved a name for themselves as legends of the sport. There is a name which many people are not aware of and for some reason gets overlooked. If the Dutch had Ramon Dekkers, Britain had Ronnie Green.

Green’s list of achievements includes numerous victories over both European and Thai champions. He was the first Brit to win a world title and then went on to win them in four different weight divisions. He (alongside Dekkers) also demonstrated the importance of Western boxing in Muay Thai which at the time was underdeveloped in Thailand.

Green was raised in Manchester and first began training in martial arts in 1974, taking up Judo and Karate. This was when disciplines like Karate and Kung Fu were nearing their peak popularity. Thai boxing in comparison was a niche sport and had yet to take root. It was not until 1978 that he began training in Muay Thai. His trainer, Master Toddy would train him throughout his career from the gym located in Deansgate in the centre of Manchester.

Green would have his first fight just over a year later in 1979. This was the time when people had begun to wonder what was the ‘best’ or most effective martial art. There were stylistic matchups between the different variations (Taekwondo vs Karate etc). Many of Green’s first fights came as a result of people challenging Master Toddy’s school and style of fighting. This meant Green fought in Thai boxing, WKA kickboxing (similar to K1) and full contact Karate (above the waist only). This gave him a unique style which has not been replicated since.

Due to the multitudes of styles which were clashing and mixing, Green and his trainer created a hybrid style. Indeed, Green currently teaches this as a distinct art form of its own. Unlike the marching, stand and fight style of the Thais, Green adopted a more movement-based approach. He has repeatedly spoken of his admiration for the boxing greats such as Muhammad Ali and Sugar Ray Leonard. His admiration can be translated into his footwork as he skipped round the ring avoiding the relentless pressure of his opponents. This can also be credited to the explosive, quick movements which are used in full contact Karate to deliver strikes whilst avoiding damage (and can still be seen if you watch American kickboxing today).

If you watch Green’s fights you will also probably notice the way he handles clinch engagements is quite unusual. The way he throws people in the clinch shows his Judo pedigree. It is less of a trip but more of an O Goshi (or full hip throw). Although it would be considered an illegal throw with the rules we have today, it was none the less an effective technique which helped to nullify any advantage his opponent might have in the clinch.

Possibly the most famous bouts of Greens were the duo he had against Sombat Sor Thanikul in 1990. It was a well-publicised East vs West match with the UK champion facing off against one of the toughest Thai’s of the decade. Sombat was the reigning Lumpinee Stadium champion and was regularly called upon to beat down on the westerners who thought they could compete. The first bout took place in London and was broadcasted to audiences in Thailand. That in itself was history that being the first world title to be contested in the UK.

The first round started with Sombat coming out slowly in the typical fashion. Green had other ideas an instantly began to put Sombat on a hair trigger alert through the use of feints. Green used a probing lead hand to keep the Thai on the back foot and reacting to Green’s movement. Sombat threw a number of hard kicks to the body of Green but was immediately counter with hooks to low kick combination that were not checked. The second round proceeded in much the same way with Green working over in longer combinations whilst Sombat seemed content with relying on powerful body kicks. But Sombat’s leg was taking a beating, toward the end of the second round he was actually put on the floor because of the power of Green’s leg kick.

The Lumpinee champion came out with venum in the third. Storming forward and delivering hard knees to Green and trying to wear the Brit down with a clinch war. Green was able to mitigate the worst of the damage and kept the scoring to a minimum. It was still the strongest round for Sombat had shown throughout the fight.

Sombat came out as a whirlwind of kicks in the fourth but this initial aggression quickly faded. The rest of the round was summarised by Green pushing him back with his long boxing chains. The gap in boxing knowledge was abundantly clear. Green was able to string together his punches with his kicks, a skill Sombat lacked. The reliance on his kicks meant Sombat was simply getting outworked by Green.

The Thai looked visibly disheartened as he came out for the final round but both men went toe to toe. Green utilised his counter crosses whenever his opponent threw the right body kicks and continued to pepper the lead leg with kicks from both Southpaw and Orthodox stances. The fight went the distance in what looked a comfortable win for Green, however the judges declared it a draw.

The controversial decision resulted in a rematch later in the year. The result was the same with Sombat unable to match Green’s boxing prowess and feints. Despite a more aggressive start Green was declared the winner on points.

Green retired from fighting in 2002 although he continues to train and teach. Throughout his career he had shared the ring with many of the sports brightest stars. Including none other than Sagat Petchyindee. Sagat has no less than 151 knock outs to his name and was one of the few Thai fighters to use boxing effectively in his style. Although Green would lose on points when they fought in Japan, the contest was by no means one sided and displayed the skill of both men.

Why Green is not more universally recognised I cannot say. But even a brief glimpse at the history behind this man is reason enough to respect the impact he has had on the sport especially in the UK.