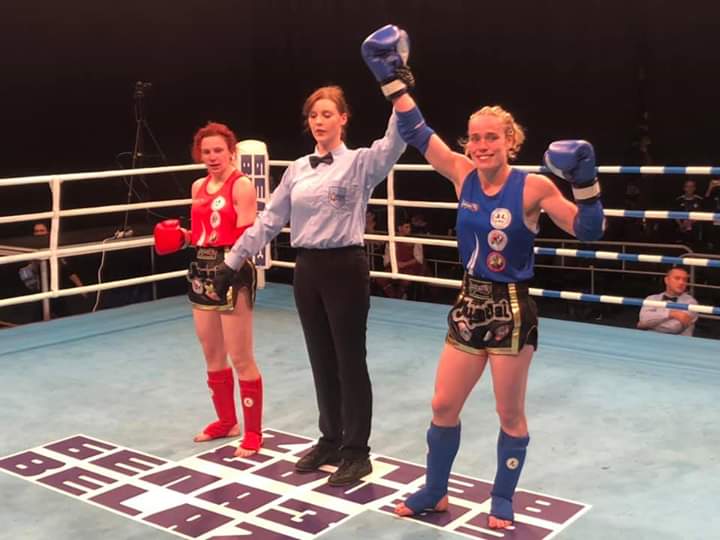 A total of 29 bouts were featured on the opening day of the 2019 IFMA European Championships which kicked-off earlier today in Minsk, Belarus, with 5 of Sweden’s 12 athletes in action.

Tournament favourite Sofia Olofsson started her 2019 campaign in style with a second-round stoppage over Belarusian Kseniya Novikava. She now moves onto the semi-finals of the Elite Female 54kg division where she faces Czech Viktorie Bulinova on Friday.

Four-time IFMA Champion Patricia Axling was next up in the Elite Female 57kg division, dominating the home fighter Volha Zhurauskaya taking a 30-26 unanimous decision. She moves on to face Spain’s Viktoriya Boyanova Tsvetkova in the semi-final on Friday.

Next up in Bout #8 was wonderkid Nicholas Bryant against Frenchman Celestin Mendes. After three rounds, the bout was scored even at 28-28, but the judges awarded the decision to the Swedish star.

Bryant moves on to the quarter-finals of the Elite Male 60kg category, which has a total of 10 entrants this year, where he will face Spain’s Francisco Jose Millan Alonso tomorrow.

Next up in the Female Elite 63.5kg division, Sara Matsson faced a tough test against Russian Svetlana Vinnikova, ultimately losing a 30-27 unanimous decision to one of the tournament favourites.

Andreas Gardsevic was last up for the Swede’s on Day 1, competing in the Elite Male 86kg division, he beat Greek fighter Andreas Papasakellarioy by unanimous decision and will move on to semi-finals on Friday where he faces Azerbaijan’s Rafael Mammadov.