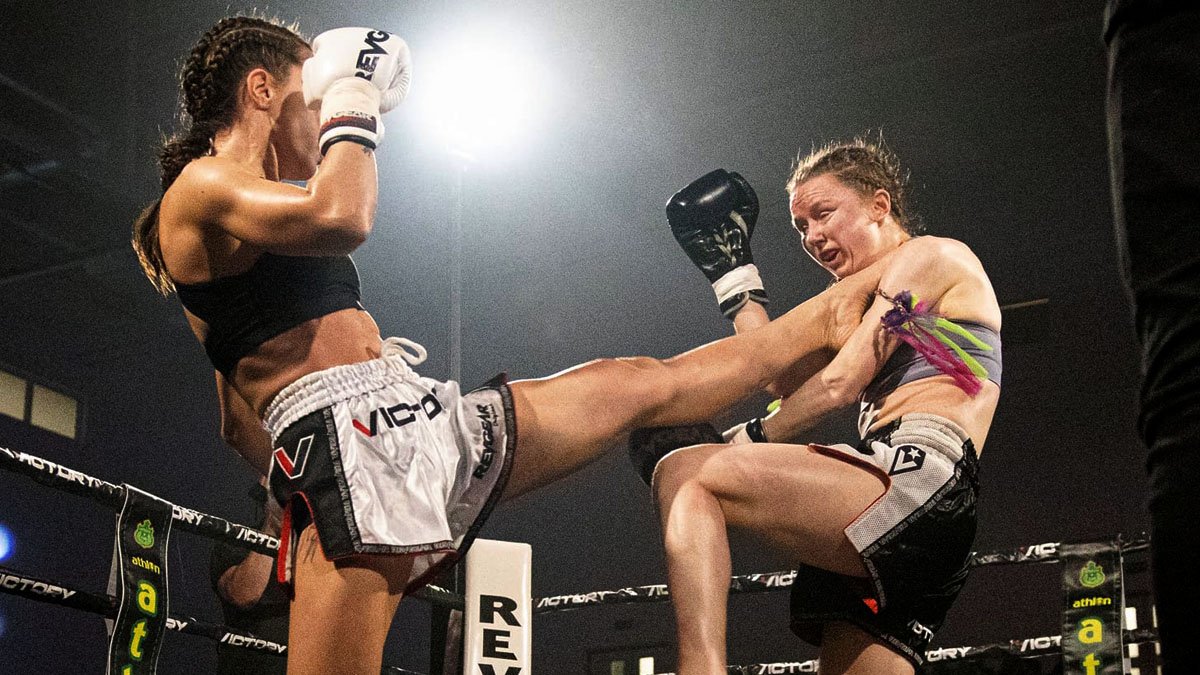 Back in April, Victory Promotions launched the Victory League. The concept pits four of the best fighters, all facing each other over three events. Each fighter is awarded points based on their performance in each fight. The winner of the League is the fighter that has accumulated the most points over the three bouts and will ultimately win the £7,000 bonus.

The Thai Fighter UK Flyweight #1 Meg Corwell solidified her spot as the best in the UK with a victory over Rhona Walker in the first round of the Victory League in April. The pair first met at SuperShowDown in July 2021 where they battled to a draw, but it was Corwell who landed the spoils in the rematch at Victory 8.

Meg will now defend her UK #1 spot against Marie McManamon, who also earned a victory in her first Victory League bout at Victory 8 in April. She defeated WBC European and International champion Dani Fall in a bout many claimed Marie to be the underdog.

Meg Corwell and Marie McManamon are level on points at the top of the Victory League, both scoring 4 points each in the opening round. The Victory League scoring awards points for every round a fighter wins, plus additional points for knockouts. So either Meg or Marie could head into the final round of bouts set for December with pole position to take the £7,000 Victory League grand prize.

In the second ladies Victory League bout, we will see former UK #1 Rhona Walker take on Aline Seiberth. Despite a narrow loss to Meg Corwell in the first round of bouts, Scotland’s Rhona Walker remains one of Europe’s top female Muay Thai athletes and will compete against a former European title contender in Switzerland’s Aline Seiberth.

Seiberth, who trains out of WBC Hall Gym in Basel, Switzerland, is a former WBC European title contender, having lost to Dani Fall back in 2019. She comes in as a replacement for Dani Fall due to the Telford fighter being unable to commit to the date. Since the loss to Fall, Seiberth has defeated the likes of Malaika Hodapp, Chloe Nandi and Ines Calado, but has lost out to some of Europe’s other top Muay Thai fighters like Cindy Silvestre and Monika Chochlikova.

Rhona Walker, on the other hand, has registered wins over the likes of former ONE Championship athlete Anne-Line Hogstad. She also has also shared the ring with some of the world’s best female Muay Thai fighters throughout her career, such as Wondergirl Fairtex and Allycia Hellen Rodrigues.

In the men’s Victory League, both Jack Cooper and Federico Alfaro have withdrawn due to injury. With no replacements available, it has been left to Niall McGreevy and Luke Bar to battle it out in a two-fight shoot-out for the Victory League prize.

Northern-Irishman Mcgreevy showed solid heart in his first Victory League bout, stopping fan-favourite Jack Cooper with a body-knee stoppage. He withstood an onslaught of punch combinations from Cooper and dropped the northeast star three times to win the bout and take 6 points in the Victory League.

Englishman, Luke Bar, also scored an equal 6 points with a doctors stoppage win over Federico Alfaro. Despite a slow start to their bout, the Knowlesy Academy fighter picked up the pace and scored well, slowing down the initial pace of the Portugese fighter. In the third round, Federico suffered a dislocated shoulder after a clinch exchange. Unable to continue, the referee immediately called the contest to a finish.