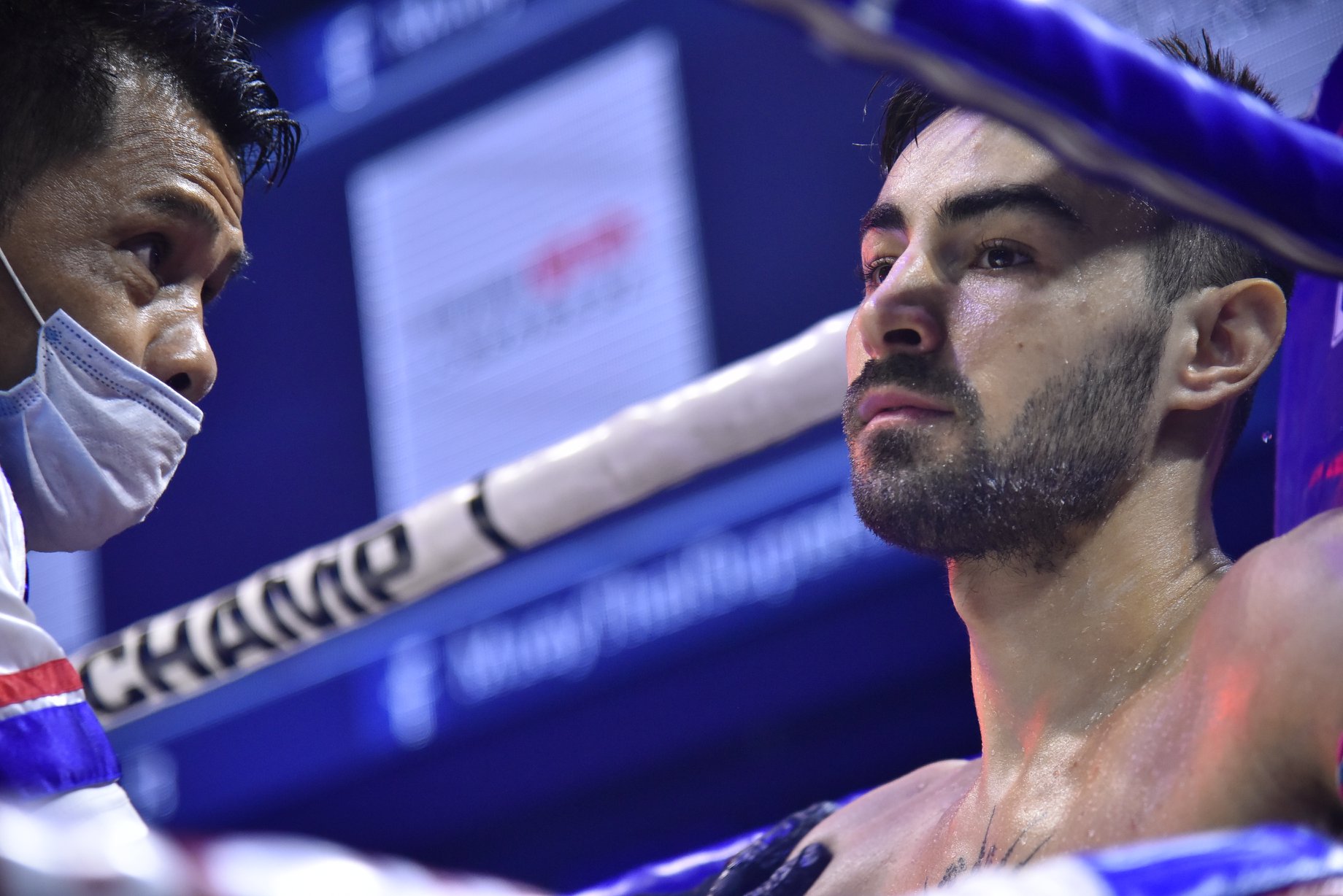 Stefan Korodi is a Romanian Muay Thai fighter currently fighting and training out of the infamous P.K Saenchai gym in Bangkok.

Stefan kick started his Muay Thai career after moving to Ireland at the age of 19 and walking into his first MT gym at 20.

He has since amassed a fight record of 16 wins, 3 losses and 1 draw. His most recent win coming by way of decision on the Muay Thai Super Champ promotion in Bangkok.

Firstly, congratulations on your win! How was the fight for you?

“Thank you, the fight was good until the first 20 seconds of the second round. From there I broke my arm, after that I tried my best to adapt to the situation. I went into the first round fighting like they do in the stadiums, I wanted to continue this throughout the fight and I was doing well until my arm broke.”

How did you feel going into this fight after a last minute change of opponent?

“Honestly I felt nothing, I don’t know why as that has never happened before. I was more nervous going into training the week before than going into this fight.”

You took a loss on your last fight at Muay Thai Super Champ, did this impact the way you trained for this bout? Were there any changes to your fight camp?

“The fight camp was the same as any other for previous fights. I trained hard but sometimes trained for longer. I lost my previous fight on Super Champ because I was sick for 3 weeks, my body was worn down and tired, I had no fitness and could barely hit pads for the three rounds. I tried to lie to myself and everyone else by saying that I was fine but this was a big mistake.”

What’s it like training at P.K compared to other gyms you have trained at? There’s obviously a lot of high ranking fighters there, does this help when it comes to training for a fight?

“You see, I don’t really know how it is in other gyms, I’m not the kind of guy to bounce around different gyms. I’ve only trained in three gyms altogether; Dublin Combat Academy, I trained in Koh Samui the first time I came to Thailand for three months and now I train at P.K since moving here last year.
But yes, there are so many elite level fighters here that it does help with training. It does have it’s cons, if you’re not mentally strong you can feel bad about your skill set and technique as it’s so easy for them to outclass you and make you feel like you know nothing. Everything they do is so easy and effortless to them, you start to wish it was just as easy for yourself. It’s very good training but you need to pay attention.”

“The main difference for me is the intensity and length of time. While at home you train around 3 hours and you can take it easy if you’re feeling tired or your body is in pain whereas over here you can train up to 7/8 hours a day. Everyday you have pads, bag work, sparring, clinching and weights. If you feel tired or your body hurts you get a quick massage and sent back into training.

“The main benefit of Training in Thailand is that you have the chance to focus solely on Muay Thai and improve, that is if you’re able to avoid partying here, over here there is always a party somewhere haha.

“I miss my brothers from DCA and the training of course but mainly the fun.”

Obviously your injury has thrown a spanner in the works for you, but what are your plans going forward?

“My plans are to fight again for sure but it depends on how the arm heals. I don’t know if I will need surgery yet or not. After a week or two everything will be more clear. My main plan is to continue to live and fight in Thailand but if a good fight is offered I would take a trip back to Europe anytime.”

Are there any fights you want in particular or any opponents you have your eyes on?

“I know many people who say they need big money or a title shot to fight because they think they are too good to fight some people, but not me. I will fight anyone worthy and I will fight them anywhere.”

You only have one draw on your record against Scotland’s Spencer Brown, how do you feel about that decision? Would you change anything if you could go back to that fight?

“It was a very good fight, I think I learned the most from this fight. For me the result was a fair one but it depends on what style it was being judged, whether it was Thai or not.

“I would change the way I was fighting, I was too relaxed and he was very smart and dragged me into his game up until the third round.  I would also not travel home so soon before the fight, I only had 2/3 days so that was a big lesson, I would give myself more time.”

For those of you who haven’t seen the Korodi vs Brown fight, you can view it here: https://www.youtube.com/watch?v=6ie44-HlVI8 – let us know in the comments if you agree with the decision!

How did Muay Thai come into your life and how has it helped shape you into the person you are today?

“Muay Thai first came to me when I watched the move Ong Bak at 12 years old ahaha, but nothing came from it then. I didn’t start training till I moved to Ireland; a friend told me about a gym that was 5 minutes from my place so I went once and have’t looked back since, I was 20 years old and I’ve only ever stopped due to injuries.

Let us know in the comments where and who you would like to see him fight in future!