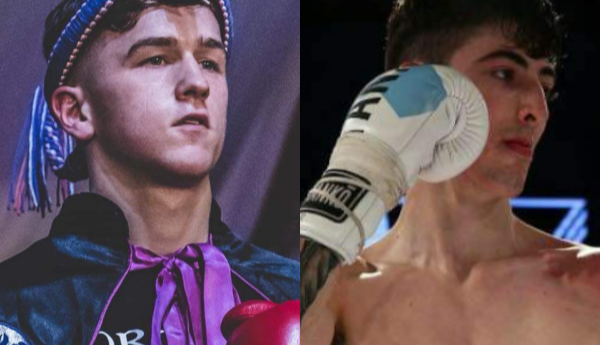 Victory Promotions have added yet another quality bout to the already stacked card for their next show Victory IV on 8th December; current UK #2 Callum McGowan of Griphouse gym will take on current #4 Stevie Irvine of Glasgow Thai Boxing Academy for the 55.4kg UKMF British title.

Having already fought once before under Pro-Am rules two years ago, many will be anticipating an exciting rematch between the two young Glasgwegian’s who make the trip south of the border to contest the British title under A-Class rules. On that previous occassion, Stevie Irvine, who was voted Scotland’s #1 rising star, came into the bout as the favourite in many peoples’ eyes, but it was the Griphouse‘s Callum McGowan that came away with the close points decision.

The Glasgow Thai Boxing Academy prospect, Irvine, racked up over 50 junior fights before turning pro, which included 40+ wins, winning multiple titles including a WMC title. The Glaswegian became Scotland’s youngest ever STBA champion at 16-years-old and was ranked #2 in the UK at 53.5kg before making the move up to 55.4kg where he is currently ranked #4.

Having fought some top names such as Mondo Woodcock and other international fights, he narrowly lost out on an ISKA European title against Ryan Sheehan before another close decision loss against current 57.1kg #1 Reece Thomson after stepping up in weight and taking the fight on three-weeks notice.

Under the guidance of veteran and former UK #1 Keith McLachlan, current UK #2 Callum McGowan has gone from strength-to-strength since his junior Muay Boran days. After joining Eclipse Muay Thai back in 2014, Callum‘s first fight was against a much larger French champion on the Awakening show. After getting dropped in the first round, Callum dusted himself off and showed true heart to go on and win the fight handily.

Since making the switch to Griphouse with McLachlan, Callum has been undefeated as a pro including the aforementioned win against Stevie Irvine.

“With Callum’s fight IQ, he has the ability to know how to outscore his opponents during the fight and this helped to get the win against Stevie.” – Keith McLachlan

After a stoppage victory against Mondo Woodcock on Ultimate Muay Thai last year, McGowan is the current #2 at 55.4kg and is on a winning streak with his last four fights being stoppage wins.

Who takes the UKMF 55.4kg British title on 8th December? Let us know your predictions on this hugley anticipated rematch between two of Scotland’s best at 55.4kg.