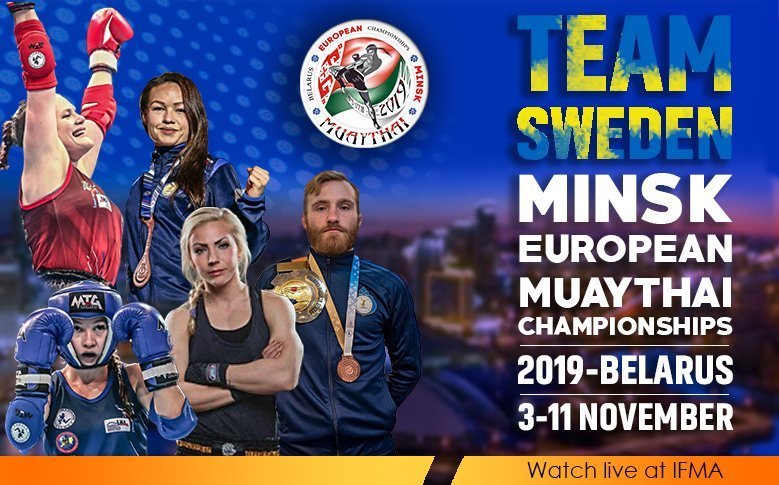 The 2019 European Championships arrives in Minsk in two-weeks time, held from 3rd – 11th November, where the amateur Muaythai tournament returns after two years since Belarus hosted the IFMA World Championships.

This year’s European Championships will include the traditional Elite division and youth 12-13, 14-15, 16-17 years divisions.

Did you know?
You can view all Swedish fighters by using the ‘regions’ drop-down menu on the fighters index.  Sign-up here to get your access.

The European Muaythai Federation recently published the list of elite athletes to represent the Swedish national team at this years Championships.

GLORY Kickboxing star Sofia Olofsson returns to lead the national team this year, entering the -54kg which she has dominated for many years.

Her Odenplan Fightgym team-mate and two-time European champion, Patricia Axling, will also be flying the flag for her country in Belarus this Autumn. Losing out to Karolína Klusová at the Baltic Open earlier this year, she will be looking for redemption and hoping to claim her third European title.

Three-time European bronze medalist Camilla Danielsson also makes the team again. She will be hoping to go one or two better this time round and get back to winning ways after a loss in the first round at the IFMA World Championships in Bangkok in July.

Angela Mamic is confirmed in the 71kg division. She will be on the hunt for a rematch after losing out to fellow Scandinavian fighter Anna Rantanen in the final at the World championships in Bangkok in July.

The fifth and final addition to the Swedish team sees exciting newcomer Nicholas Bryant enter the squad after a sensational display at the IFMA World Championships.

Bryant caused a huge surprise by beating the former World champion Wiwat Khantha in the opening round on his way to a bronze medal, and his since claimed a huge stoppage win over Joshua Scales at Lion Fight 59 in Gothenburg.

The 2019 European Championships are listed as an official qualification event for the esteemed World Games 2021 and medalists will receive points towards qualification rankings.