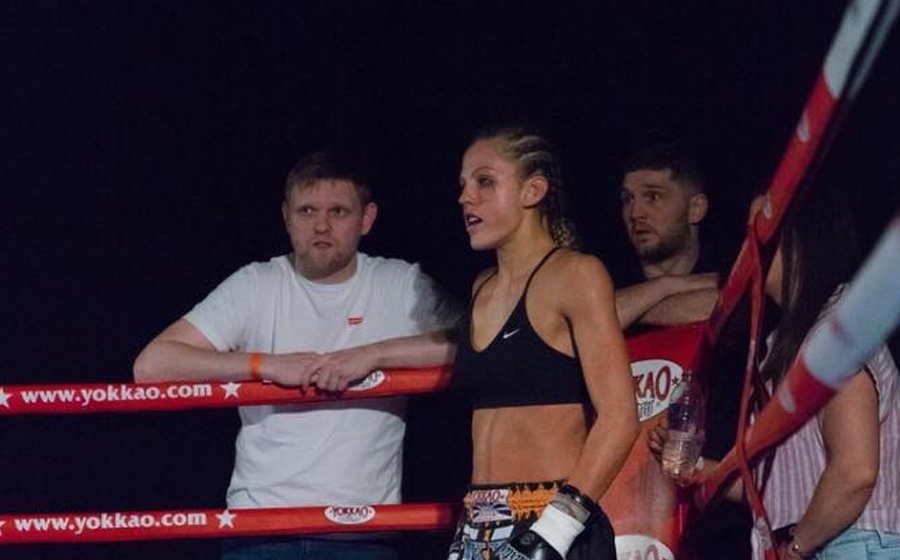 2020 was a difficult one for those of us involved in Muay Thai, especially those of us looking forward to travelling out to the Motherland to train and fight.

One fighter who managed to make it out to Thailand before restrictions became heavy was Aberdeen Combat Centre’s Judy Humber, who has been living, training and fighting in Thailand since the start of the pandemic.
FR caught up with Judy before and after her fight against Maisha Katz.

How is life in Chiang Mai and training at Lanna Muay Thai?
“Life in Chiang Mai has been treating me well, I can honestly say the Lanna Muay Thai team have taken me in like a member of the family. I can’t imagine what the last ten months would have been like without them.
The gym has been quiet since it reopened in June after the lockdown here so it’s become a very tight knit group for training with everyone helping each other, trainer or student, to prepare for whatever fights we can get.
We’ve been lucky to avoid another lockdown although it looks like that could change very soon with the rise in cases and a lot of shows getting cancelled.”

Tell us about your experiences so far and your first two fights in Thailand?
“There’s been a lot of ups and downs since arriving in Thailand. When I landed the gym was already closed and I went straight into lockdown before I’d even met anyone. When we were finally back training in the gym and getting ready for fights I got pretty sick and ended up needing surgery. It was dead frustrating after months of training and no fights to be out of action again when fights were finally starting back but it was good motivation to get recovered as quickly as possible.
I finally got my first fight in Thailand after being here for almost 8 months against Jitti in October and then I had my second fight a week later against Yodyutying.
As a lot of fighters know, being out of the ring for a while reminds you just how much you love it and I really enjoyed those two fights. It felt great to be back but also reminded me how much I still have to learn, especially with the style of fighting here being pretty different to the fights I had back home which weren’t A class with full Thai rules.”

Judy took a points win (5 rounds) over Jitti on the Ban Nam Mo Yen promotion in Chiang Mai and another points win over Yodyutying in Lamphun the following week.

What are your short term and long term goals in Thailand?
“I had been hoping to get fights in really regularly this year and build up some more experience fast but with the situation worldwide I’m just grateful to be getting opportunities to fight, especially ones as good as this. I’m staying optimistic for a much busier 2021 though.”

Pre fight – What do you know about your opponent Maisha Katz?
I know she’s got a lots of good experience, fighting with some top class Thai opponents including Sawsing and Fahseethong and she’s had a Lethwei fight so I have no doubt it’s gonna be a hard fight. She seems like a tough fighter with a lot of heart. I think it’s going to be a big step up for me but I’m really looking forward to this challenge”

Post fight – How did you feel about the fight and your performance?
“I was pretty nervous for the fight, a lot of people had warned me she was going to be really strong. One of the boys at my gym had been joking that I was going to get KO’d in round one, so I was definitely feeling the pressure but it’s not the first time I’ve been the underdog so to speak and I knew it was going to be a great learning experience for me win or lose. I was ready to go for it.

This is the heaviest I’ve ever fought and I definitely felt the difference because she was really strong in the clinch. I’ve been really working on my clinch but the week of the fight I pulled something in my shoulder and my whole neck seized so I lost a lot of confidence in my clinch. It changed up fighting off the back-foot which isn’t my usual style, to try and avoid clinching because I felt like I could score better striking.

I’ve watched it back since and there’s definitely a lot of things I need to work on but I’m really happy the adjustment paid off and I got the win!
My opponent and her team were really respectful and Maisha is a really game fighter, her aggressive style made her a tough opponent, I think it would be a great rematch at some point down the line for sure.

I’ve learned a lot from this fight and I’ve got a lot of new things to focus on in training. I’m really looking forward to being back in the ring again, applying the changes and improving each time!”

Do you plan to return to the UK and fight once travel restrictions are removed? If so, are there any match ups you have your eyes on?
“I feel really blessed to have made it out to Thailand when I did so I’m definitely trying to stay out here as long as possible to really build up my ring time. Until shows are back on again in the UK it doesn’t make sense for me to go home. I definitely feel the homesick pangs and I miss my family, especially over the Christmas period but hopefully these kinds of sacrifices will pay off further down the line. When I do go home I would love to work my way up the rankings and see how far I can get. The standards are just as high at home especially in my weight class so that’s a big goal for further sown the line. For now though the focus is on learning fast and gaining as much experience as possible while I’m here.”

Judy’s time in Thailand has taken her up to her 7th win, with only 1 loss against her she sits with an impressive win record of 88% making her a formidable opponent for anyone. Humber currently doesn’t have another fight booked as restrictions continue to change in Thailand and fights are being cancelled throughout the country, she did however let us know of her plans for the foreseeable:

“I’m away to Phuket for smokey season soon so hopefully get some fights there. I’m not sure what gym I will be going to yet, I know a few folk at different gyms so I think I will try a few and mix it up a bit! Get battered by some new strangers!”

Smoke season or burning season lasts a few months in Chiang Mai, farmers in the mountains set fire to the land creating extreme levels of air pollution down in the city, making it incredibly hard for fighters to train. Many foreigners make their way south between March and June because of this.

Let us know who you would like to see Judy matched against in 2021!