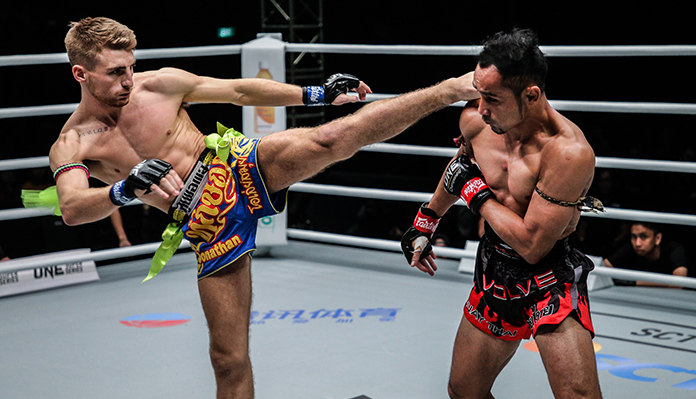 Jonathan Haggerty is fresh off of a barnburner fight with one of Thailand’s top fighters, Rodtang Jitmuangnon.

This was a title defence of Haggerty’s One Championship flyweight title, and although he did not get his hand raised, he proved he is one if the best flyweights in the world at only 22 years of age.

Haggerty’s career so far has been outstanding, nearly always fighting at a huge experience disadvantage, but somehow, he beats opponents handily.

What makes Haggerty a special phenom is the fact that he beats opponents not through raw talent and power, but through elite technique and a fight IQ that you would expect from a Thai Boxer with several hundred professional fights. Haggerty has had less than 20.

In those fights, however, we have seen an incredible style of fighting emerge. Haggerty has one of the most impressive left legs in the entirety of Muay Thai. His ability to throw teeps then left kicks the teeps again in rapid succession, while working out of southpaw for some of that time too, is hard to compare to any other Thai boxer. It really seems to be a level above the rest.

He uses that left leg to set up devastating elbows, often off of a fake teep, he will throw a huge downwards elbow. That’s the elbow seen around the world that he caught both Joseph Lasiri and Sam-A Gaiyanghadao with.

In fairness, Haggerty’s ability isn’t as surprising when you consider that he was born into a fighting family, with his father being a kickboxer. Haggerty was training in his father’s gym, Team Underground, from the young age of 7 and competing as a junior, dabbling in karate and semi-contact kickboxing competitions just a year later.

Semi-contact wasn’t for Haggerty though, as he was disqualified for going too hard, it wasn’t until the age of 12 where he started competing as a Thai Boxer. As a junior, he was able to take home both British and European titles before moving into professional competition.

He was a teenager when he turned professional, finishing fights left and right, including a head kick knockout and an elbow knock out in the space of just over two months at the Chaweng Muay Thai Boxing Stadium, Thailand, at the age of 17.

He then picked up his first world title, the ISKA Super-Featherweight   Thai World Title against Gery Bavetta at MuayThai Mayhem by knockout in the third round.

The General fought on some of the United Kingdom’s top shows such as Muay Thai Grand Prix, MuayThai Mayhem, UCMMA, Roar Combat League and one of the world’s most well-known promotions; Yokkao.

It was in Yokkao where his potential was shown, even though he won one fight and lost two with the promotion.

In his promotional debut he took on Ja Kiatphontip and although he lost on points, he showed that with 10 professional bouts under his belt he could mix it up with the top Thai’s in the world.

His next fight for Yokkao was one of his best performances and one of the most impressive knockouts in 2018. He caught former WBC title holder and UK number 1 Keith McLachlen with a brutal left high kick early in the second round. The always game McLachlen beat the count but was hit with another huge high kick literally seconds later.

The general then returned to MuayThai mayhem to claim his second professional title, the WBC MuayThai super-featherweight International Title which he took by way of forfeit against Spaniard Isaac Araya in the second round.

He then took his second loss against the 2013 Lumpini stadium champion; Superlek Kaitmuu9. Haggerty was landing well with his teep and left kick but the fight was called off due to a cut that Superlek delivered with a downwards elbow. It’s a shame the fight was cut short and many respected veterans like Liam Harrison believed the fight could have gone on.

Even in that loss his potential was clearly apparent to the global promotion, One Championships, where he was matched with Italian world champion Joseph Lasiri in a caged Muay Thai match at One: Eternal Glory. He won the fight on points, showcasing his now famous downwards elbow which floored Lasiri in the first round. He continued to batter the Italian with elbows and left kicks for the remainder of the fight on his way to a comfortable decision win.

Following that excellent performance and only one fight with One Championship, Haggerty was granted a title shot against prolific Muay Thai legend Sam-A Gaiyanghadao at One: For Honour. To the surprise of a majority of the Thai Boxing community, Haggerty won the fight, despite Gaiyanghadao’s accolades, abilities and of course his 400-plus fight advantage.

Haggerty once again used his beautiful lead leg work to set up his devastating elbows, once again using that almost iconic elbow to drop Gaiyanghadao twice on the way to a five round unanimous decision.

His constant work with his lead leg and his feints which he used to hammer in elbows as well as big punches didn’t allow Sam-A to find a rhythm, and he remained relatively defensive throughout the fight.

After winning the title Haggerty then called out one of the most successful, one of the most popular, and of course one of the most frightening Thai boxers in the world now; Rodtang Jitmuangnon, ‘The Iron Man’ who had been on an incredible run as of late.

His fight with Jitmuangnon was an instant classic. It was interesting to see the tables turned in the old Nak Muay vs Farang face off, as it was Haggerty who was scoring well with long kicks and elbows, while Rodtang was looking to box and throw crippling low kicks.

The fight was all action with Haggerty going blow for blow in the pocket with Thailand’s best while also scoring well with his left kick which Rodtang struggled to counter throughout the fight.

The fight started off well for Haggerty, as he effectively outscored Rodtang, keeping his distance and when he did end up in the pocket, trading well with the ferociously powerful Thai.

A huge turning point came in the third round, when Haggerty was dropped with a huge right hand from Rodtang. Despite some complaints from referee, Haggerty clearly showed his fight IQ by getting on his bike while recovering and denying Rodtang another big shot.

The fourth was a close one with both fighters having their moments, it would be reasonable to give that round to either fighter.

The fifth was another round to Rodtang. As his forward pressure and inhuman durability allowed him to walk down Haggerty, winning him the round and likely the fight.

In the end Haggerty lost his title to Jitmuangnon. It must be pointed out though, that a few top analysts such as Jack Slack thought the fight was a draw. With that being said, One doesn’t allow draws, there must be a declared winner and with Rodtang scoring a knockdown in the third as well as winning the last round, it was generally seen as a close, but fair decision.

So, what’s next for the prospect? At the age of 22 he has the potential to dominate the Muay Thai world plenty times over. As for his next fight; With Superlek going undefeated in two fights at One Championship, that could be the fight to make as it’d be an entertaining rematch, especially considering the first fight was stopped in between rounds so early on their fight.

No matter what’s next, keep your eyes on Jonathan Haggerty. He has achieved more in less than seven years with less than 20 fights as a professional than most fighters will throughout their entire careers, and it’s looking all uphill from here.