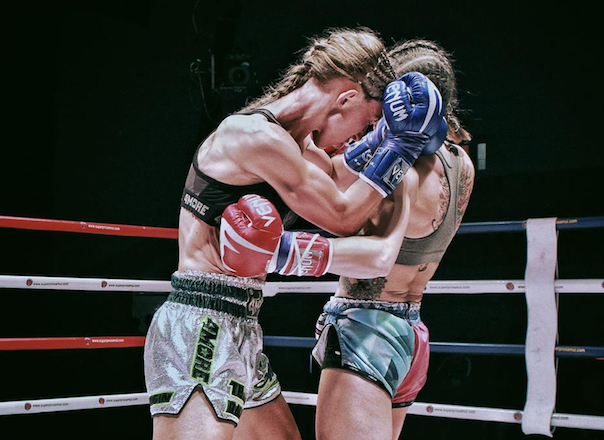 This weekend saw one of the largest kickboxing promotions in the world return to the UK after a 5-year hiatus. Delivering what can only be described as a fantastic success, the team at Coalition Promotions put on a brilliant display and created a platform in the UK for fighters to be showcased to 28 countries around the world.

To put on an event like this requires a lot of hard work, determination and grit. Craig Jose, Tony Cunningham and head man, Edwin van Os have a lot of the above qualities and this rang very true with the production and matched fights of the event that happened this Saturday gone. This level of production has never been in Newcastle but marks a shift in the quality and expectation that can be put on to the fight fans of the world.

The night started with an undercard of local and national talent, the fighters were able to make a name for themselves on one of the biggest stages the UK has ever seen. A ten-fight strong card began with Callum Ashley (Jai Suu) and Josh Thomas (Contender Fight Academy). Both young and hungry and wanting to put on a show for everyone and these two warriors did just that. Going the distance, Ashley managed to take the win with his knees and keeping his length playing his height to his strength.

The first of the women to fight was the only full Thai rules fight of the evening. Hannah Brady took on Tanya Merrett. Brady took the win in a close fight but looked just that bit stronger than he opponent. Both women did fantastically well but Brady’s effort did enough to secure a split decision.

Brother of the Enfusion world title, Thai Barlow fought a Spanish opponent, Alex Rives in a very exciting match-up. Thai Barlow is currently the UK number one in the Thai fighter rankings and made the transition to fight under Enfusion rules and did incredibly well. The fight was very even throughout with both fighters giving their all. At the end of the three rounds, it was deemed a draw, then having to go to a fourth, deciding round. This lit a fire under the Englishman and he came alive to dominate his way to the win in the last round.

First up on the Enfusion talents card was Nathan Ryder against Kane Birring. Stopping Birring in the first round, Ryder was set for a successful final after not having to go the distance and not being too beat up in the first fight. Next up in the four-man tournament was Gary Laws vs Elvis Almario. Elvis came out meaning business and Laws was about to fall victim to this. Both fighters knowing that they have to bring the fight to an end as quickly as they can to be as fresh as they can in the final. Elvis landed very big hands dropping Laws early on, not recovering properly, Laws was dropped again and was unable to continue. Sending Elvis into the final with another first-round stoppage, the final was set for fireworks. Both competitors having stoppages in the first round, the winners of the four-man tournament can now relax and get ready for the final.

Next up was Millennium’s Joker, John Cairns. The fight started well for both fighters but Cairns’ opponent, Giacamo Licheri delivered a devastating spinning back kick directly into the liver of Cairns rendering him unable to continue. With another first-round stoppage, Enfusion was shaping up to be a wild night.

Jack Bullock has recently been making a name for himself on the Kickboxing circuit with an impressive record of 6-0 it was his time to shine on the big stage. Fighting a very tough Romanian, Bullock had his toughest challenge to date ahead of him. Knowing that he had heavy hands, Jack played to his strength and kept his distance. It became apparent in round two that Andrei Balici did not like the knees that Bullock was delivering and was wincing when they were ploughing through his guard. Keeping active throughout Bullock took his undefeated streak to 7-0 via a unanimous decision.

Leigh Newton and Sofia Holmer ended up going the distance and more. Both fighters put their heart and soul into the fight and after the three rounds were decided to be a draw and set for a fourth deciding round. Taking the win via a split decision, the IFMA Bronze medallist took a win back to Phoenix.

This next fight was definitely the fight of the night. The final of the four-man tournament. Nathan Ryder vs Elvis Almario was an absolute pleasure to watch. Ryder made a fantastic account of himself, coming out and putting Elvis to the test and pushing him further than many have previously before. The fight was non-stop action from start to finish and was going in the favour of Ryder but in the very last second, 2:59 of the very last round Almario knocked Ryder clean out. In the fight game, the fight isn’t over until it is over and both fighters put on a brilliant display of kickboxing for the fans at Sports Central and for Enfusion fans around the world.

Bad Company’s Joe Craven had his first venture into Kickboxing and Enfusion rules and he made a very good impression. As his coach, Richard Smith said, “he looked stiff in the first but came alive in the second.” Craven was pit against Valentin Margos and took the win via a second-round stoppage. Looking incredibly sharp, Craven was lightning fast and really looked comfortable in there once he had settled into the fight.

Then onto the main card of the evening. Enfusion Live. What a card. The fights on this card were spectacular and certainly deserved the hype that was built up, on the run-up to this event. First up was Thierry Mosimann vs Kyle Todd. In the build-up to this event, these two warriors had a lot of back and forth on social media and it definitely showed in this Enfusion rules bout. Matched over 3x3min rounds Todd wore the Swiss man down and solidified himself a unanimous decision win. His work rate ground Mosimann down and proved too much for him. After the first Mosimann looked as though he was struggling to keep up with Millennium’s top boy and just couldn’t set himself into a position to take the lead.

If there wasn’t enough action already happened on this Enfusion event, this fight was followed by another four stoppages early in the fights. Ammari Diedrick stopped Bad Company’s Michal Dzuida in the first with a nasty knee to the liver. Amy Pirnie knocked out Swiss opponent Aline Seiberth in the first round with another knee to the body in under 90 seconds. Leif Taggart vs Marian Lapusneanu was ground to a halt in the second round with a big kick and the final stoppage of the evening went to Juan Cervantes against Mehdi Fassal. In a very impressive way, Cervantes knocked Fassal out using his height advantage and wrapped his shin around his face.

The co-main event of the evening, Chris Shaw was one of the most anticipated bouts of the night. In another kickboxing debut, Shaw had said that he was looking forward to showcasing his abilities on the international stage and he did just that. Working his opponent, Simon Santana for the full three rounds, Shaw did more than enough to secure his unanimous decision. Using his kicks, he kept Santana at a nice length and was able to keep up with the work rate that Enfusion rules needs.

Finally, the main event of the evening. Iman Barlow defended her Enfusion world title for the seventh time and retained it in a fantastic match-up against Spanish, Lara Fernandez. The fight went the distance and was very entertaining for the crowds at Enfusion Live. Over the moon with her win, Barlow said that she will be looking to take a little rest now after this weekend’s antics and take some time to concentrate on herself and come back in the second half of the year.

In its return to the UK, the collaboration between Coalition Promotions and Enfusion was nothing more than a raging success. With knockouts left, right and centre, a venue that was very well presented and a production level that has never really been seen before, it is safe to say that they all did themselves and the sport very proud. Everyone involved has spoken nothing but positive things about the way that the event was ran and how well the fights were matched.

It will be good to see Enfusion return and are already looking forward to seeing the announcements in the coming months. A brilliant night was had by all. If you would like to see some post-fight interviews then head over to the Fight Record Facebook page and you can see Dom catching up with the fighters after their bouts.