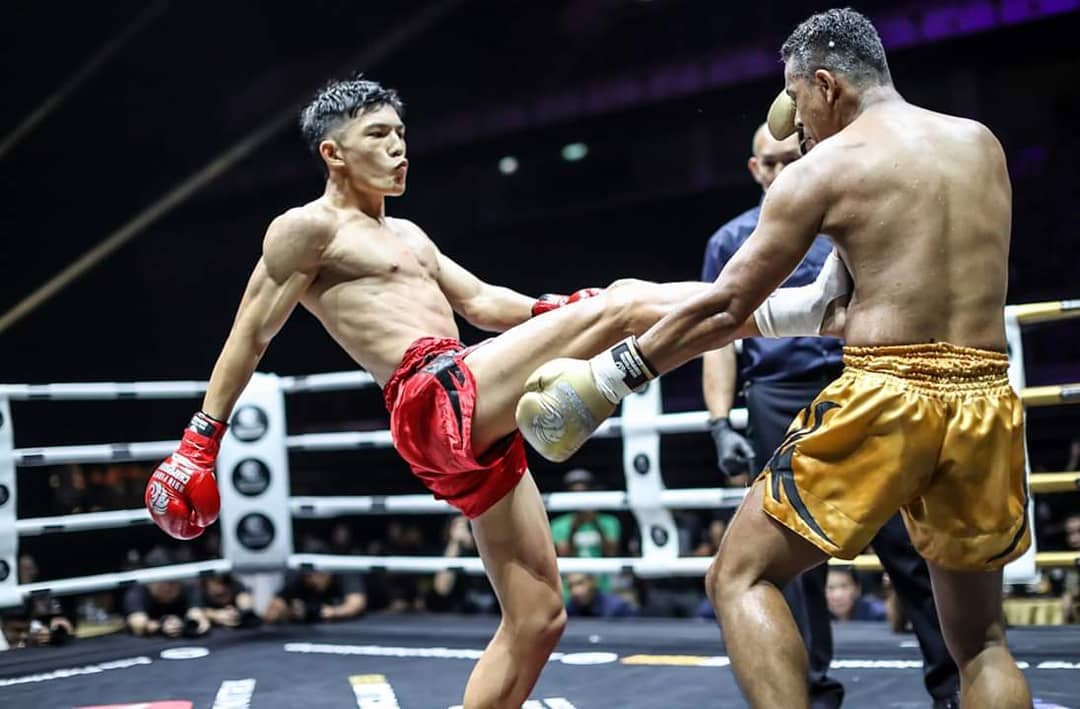 The fundamental of a counter in any martial or striking sport is to use an opponents aggression against them. This can come in a broad range of possibilities from using the opening to land your own strike to improving your position in whatever arena you find yourself in. The underlying principle is the same however, utilise the aggressive nature of your opponent to your advantage.

We can also classify counters into two slightly narrower groups. The simultaneous (or concurrent) counter and the delayed counter. The names are descriptive of when the counter action takes place, in case of the former whilst the aggressive act is taking place. And the latter, after the opponent is returning from their action. It is the simultaneous counter we will focusing on in this instance and how it can best be applied in the sport of Muay Thai.

The simultaneous counter by its nature is much more difficult to execute than a delayed counter. Success of a simultaneous counter depends on near perfect timing and execution. Trying to counter too early can make yourself vulnerable to your opponents strikes. Too late and the results of the counter will be extremely limited.

A simple example would be if you were to throw a hook to the body of an opponent. If they were just stood in front of you, a slight crunch in the abdomen would provide them with some cushioning to the blow. However, imagine they have thrown a rear hand which you have slipped, the abdomen is stretched at full extension, it’s not hard to see which will be more destructive.

The teep is one of the easiest examples of how an effective simultaneous counter. One of the best at this was Sanklai Sit Kru-Ott (later mentor to world famous Yodsanklai). On its own the teep can have a double effect when trying to distance yourself from an opponent. It pushes them away whilst propelling you in the opposite direction.

Sanklai used this technique to great effect, throwing his right kick and teeping without retracting his leg. This often knocked over his opponents who tried to respond immediately with a kick of their own (an example of a delayed counter). It also worked well against aggressive boxers, in the clip below you can see Sanklai time his teep as Wisatlek Ploisakda attempted to throw the cross causing him to lose his position and the initiative.

One of the highest scores in Muay Thai is the landing of kicks. Whilst landing to the arms of an opponent still score, a clean kick across the body is even more impressive to judges. Liam McGrandles (currently ranked number six at welterweight) had great success against ONE Championship veteran Andrew Miller in landing clean kicks to the body. A number of times throughout their bout, McGrandles would time Miller’s right cross, skipping back slightly into a left kick which struck perfectly under the arm on the extended ribcage of the Scot.

A more dramatic simultaneous kicking counter is the head kick. Even at the world class levels of Muay Thai and boxing, you can often spot fighters dropping their opposite hand as they throw a punch. It’s immensely difficult to execute each strike with textbook form in middle of a fight, and this can be exploited.

Jonathan Haggerty has had a stunning couple of years from winning a Muay Thai ONE Championship world title after taking on legend Sam-A and a strong first bout against Rodtang. Earlier in his career he faced veteran of the sport Keith McLachlan, after Haggerty’s meteoric rise, many thought this would be a litmus taste of the young prospects talent. The bout ended early in the second round with Haggerty scoring a head kick as McLachlan attempted to press Haggerty against the ropes with his boxing. Although he made the count, McLachlan couldn’t recover and was put down with a dramatic jumping round kick from Haggerty.

Another example would be Niamh Kinehan rapid knockout of Lucy Lister on their bout on Yokkao. In that instance, Lister would not make the second count as McLachlan had and the bout was stopped before many felt it had even started. This goes to show that even veterans of the sport have easily recognisable habits which can be used against them.

The step in knee

Perhaps the most risky simultaneous counter is the step in knee. The idea is to counter the forward aggression of your opponent by impaling them on the end of your knee as they come into range. A good analogy would be that of a car being driven into the back of another stationary car. There would be damage yes, however even more would be inflicted if two cars were two drive head on at each other. Even at a reduced speed the two cars driving head on will often yield more damage than a faster car driving into a stationary one.

This can be replicated with knees, as the aggressor moves in their momentum cause the counter knee to do significantly more damage. In Juan Cervantes’ bout against Santino Verbeek on ONE Championship, Cervantes had great success backing off and drawing Verbeek onto knees as the Dutchman lunged in with his boxing combinations. A brilliant example of how to use these knees as a boxing counter can be found on the Warrior Collective series by Juan’s coach Craig Jose.

Juan’s fight is also a cautionary tale however, as he got caught whilst stepping in with one of his knee. Verbeek managed to time the movement and caught Cervantes on one leg with his guard slightly lowered and managed to rattle him sufficiently to swarm and score a knock down. So whilst the counter knee can bring aggressive pressuring fights to their knees, it comes with the risk of actively putting yourself in boxing range to counter the aggressive puncher.

For some of the best examples of boxing simultaneous counters, you need look no further than the bout between Craig Coakley and Mo Abdurahman. These two fighters are some of the most exciting strikers in the world of Muay Thai today. Their bout on Yokkao 38 was one of the most action packed in the promotion’s history with both men having their moments of success.

The first example is of Abdurahman’s use of the cross counter. Abdurahman frequently uses a jab cross combination followed by a lateral shift before throwing a second cross. If he is in a southpaw stance he will slide to his left to the open side of he opponent and try and time the cross over the opponent’s own. If he is orthodox, Abdurahman will throw the left jab and right cross, then step his lead left foot out on angle then turns into this new southpaw stance throwing the southpaw left cross.

These tiny adjustents are easily missed but are very deliberate. When Coakley had him against the ropes, Abdurahman used his lateral movement to land the cross and stunned the Irishman has he attmpted to capitalise on Abdurahman’s lack of space (recall what we discussed earlier with even world class fighters struggling to maintain discipline with their guards on occasion).

That’s not to say Coakley did not have his own moments of success. The Irishman excels in pressuring his opponents for the full duration of a five round fight and is one of the best at mixing his boxing between the body and head. Interestingly, he also showed a strong ability to fight with his own back on the ropes, a position we rarely see him in. In this example you can see how he used his hook to the body as Abdurahman prepared to throw his own. In addition, Coakley chained a knee as Abdurahman once again ducked in to work the Irishman’s body.

This is one of the reasons why throwing naked hooks to the body is so dangerous, unmasked either by feints or setting up with prior strikes, it is an invitation for getting kneed in the face.

On the more dramatic or flamboyant end of the spectrum are elbows, whilst some are content with using them to cut through the guards of an opponent, others prefer to end fights in spectacular fashion. You will occasionally see fighter pinned on the ropes attempt to spin into an elbow to catch their opponent as they step in or to gain some breathing room. Whilst the back can be a tempting target for many, it requires split second timing to commit to taking the back of an opponent in a clinch versus the more common approach of backing off to avoid the elbow strike.

Abdurahman ended his fight against Coakley in one of the most stunning knock outs ever produced under Muay Thai rules. Just moments after being forced to take a standing count, Abdurahman came out to meet Coakley toe to toe in the centre of the ring. As Coakley spun for the elbow, Abdurahman made the split second decision to duck and turn into his own. The effect for Coakley of spinning full forced into an oncoming elbow was devastating. To use the previous sections analogy, this was the equivalent of two cards meeting on a motorway head on collision.

It is interesting to note that Abdurahman nearly became a victim of the same finish during his fight on Victory V. Having outscored his opponent for the past few round, Abdurahman backed him into a corner but was knocked down by a spinning elbow. The end of the round gave Abdurahman time to collect himself and go on to with the unanimous decision.

An interesting point regarding simultaneous counters is that most fighters – even of the highest calibre – tend to have only a handful of techniques that they will use to counter. For example, Liam Harrison will nearly always counter forward pressure with low kicks, Coakley will choose to box whereas Cervantes usually choose to knee. The point is these athletes have proven that even a limited selection of drilled movement patterns to call on can dramatically shift the balance of power in a fight.

Tenshin Nasukawa has managed to develop much of his kickboxing style around limiting his opponent’s choose using a sweeping counter. Each time his opponent attempts to kick above Tenshin’s shoulder he ducks his head to the opposite side whilst using his low kick to cut out the standing leg of the attacker. After landing on the canvas two or three times in a row, typically the kicker will be thinking twice about unloading another.