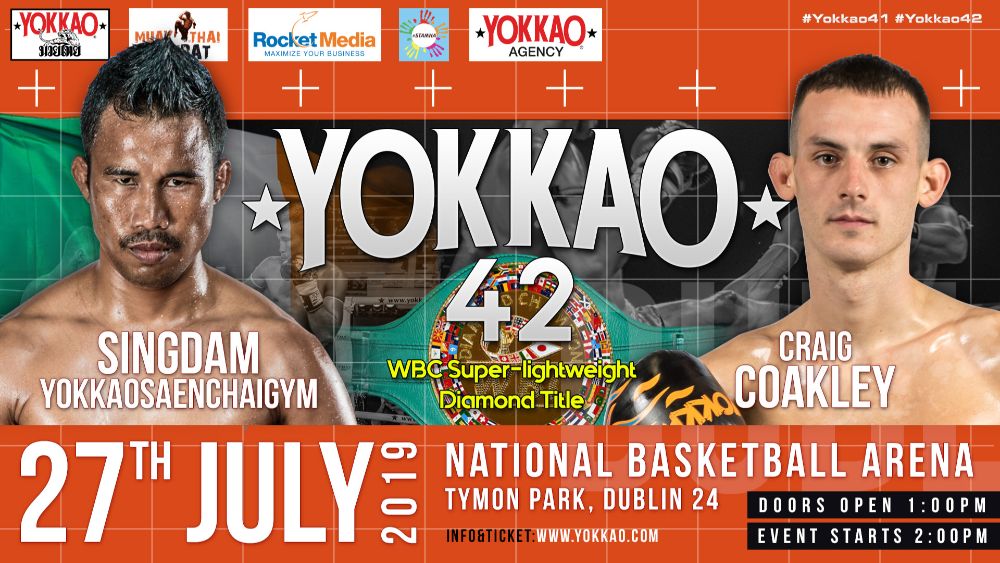 WBC Diamond and World titles on the line in Ireland, plus the return of Savvas Michael to Rajadamnern Stadium. This month is packed full of elite Muay Thai superstars in action around the World.

Here’s our picks of the top fights you definitely don’t want to miss as a Muay Thai fan this month.

On 27th July, the huge YOKKAO brand arrives in Ireland for the first time ever for YOKKAO 41 & 42, being held at the 2,500-capacity National Baskeball Arena in Dublin.

The prestigious green belt is a sought after title in combat sports and the ‘Diamond’ strap under the WBC Muaythai has only ever been won by two men previously: living legend Saenchai and Buakaw Banchamek.

Irishman Coakley will be looking to put his name amongst the greats and become one of the selected few to hold the iconic WBC Muaythai Diamond title when he faces Singdam in his home town at the end of this month.

Cypriot Savvas Michael has quickly become one of the most exciting prospects in the current generation of Muay Thai stars.

Living in Bangkok and training at the world-renowned Petchyindee Academy, Savvas has been on a path of destruction, winning his last two fights at Rajadamnern Stadium by third-round KO before being signed by ONE Championship.

In his ONE debut in May, Savvas showed his sharp technique and skill in a comfortable win over Thai veteran Singtongnoi at Warriors of Light in Bangkok.

He now returns to the world-famous Rajadamnern stadium on 11th July to face another tough Thai opponent before his next fight on ONE Championship is confirmed.

Back in Dublin, Craig Coakley’s team-mate Stefan Korodi faces Scotsman Spencer Brown in the co-main event at YOKKAO 42 on the 27th July.

Dublin Combat Academy’s Sefan Korodi moved to Thailand in April this year and has since won three fights all by stoppage, including two at Lumpinee Boxing Stadium in Bangkok.

He faces Scottish powerhouse Spencer Brown who has registered some strong wins of his own, with a WBC European title win over Luca Roma at YOKKAO 35 in Italy and most recently a stoppage win over Albert Xavier at YOKKAO 40 in Sydney, Australia in May.

The Irishman, Clancy, who won the WBC international championship at Capital 1 / Lion Fight 52 in Ireland in March, now has the opportunity to face Italian Alessandro Sara for the vacant WBC Muaythai World title on his home show Siam Warriors Superfights in Cork.

Training out of Petchrungruang Muaythai Gym in Thailand, his opponent Alessandro has a rangey style and holds an impressive record, including experience at Lumpinee, Rajadamnern and Omnoi Stadium over his 77-fight career.

Who else are you looking forward to seeing in action this month? Let us know in the comments below!