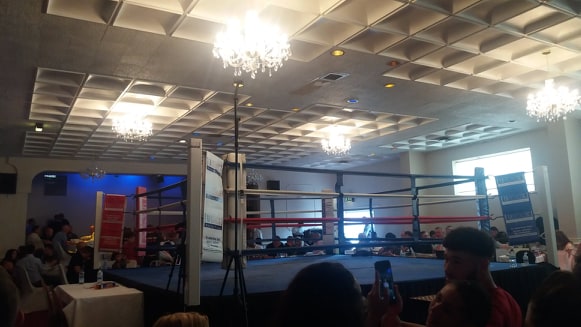 The crowd certainly got their money’s worth today as GFC Muay Thai put on a show which lived up to the promise. Fighters from both the UK and Spain demonstrated their skills in a number of fantastic bouts.

Walker looked tentative in the first round of this C class fight. His opponent took control early flicking out his jab and taking the center of the ring as well as landing a flush switch kick. However come the second round Walker came out more assertively and landing his own switch kick. Mehtab was not deterred and landed a couple of jab to left kicks from a southpaw stance which Walker wasn’t able to defend.

By the third round both fighters were landing clean switch kicks across each other’s arms. Mehtab did a better job of sitting down on his punches. Walker took a number of heavy 1-2s throughout the round as Mehtab used these to counter Walker’s kicks. Round four was similar with both fighters landing kicks but Mehtab trying to utilize his boxing more.

Mehtab walked Walker down for much of the final round attempting to land heavy boxing combinations. Although these were effective when he was in range, Walker was able to land a number of kicks as Mehtab walked him down. The result was a draw which seemed fair for such a close fight.

Segura seemed determined to make a point early in the first round as he landed long powerful kicks. Din did not let it all Segura’s way as he executed a well-timed lean back as Segura threw the right high kick. Din was able to counter with a kick across the back of Segura. In the second round Din began switching between his orthodox and southpaw stance. From his orthodox he was able to land a number of heavy leg kicks on the lead leg of Segura. But the Spaniard was able to catch Din a number of times with long straight punches along the ropes. Segura also did well chaining his kicks off his punches to minimize the risk of them being checked.

The leg kicks from Din started to pay off in the third with Segura’s movement significantly slower and less fluid on the feet. This was noticed and Din began to hunt for the Segura’s lead leg. The momentum was definitely in favor of Din. He began chaining longer boxing combinations together, working both the body and head. The knees were landing flush further slowing Segura who was struggling to score as he had in the previous rounds.

The fifth round was a whitewash for Din. Segura seemed to have no answer for the knees he was throwing and spent much of the round on the receiving end of Din’s barrage. Although a standing count was given the Spaniard made it to the end with Din taking the decision.

From the outset it seemed that Merrick’s game plan revolved heavily around catching the kicks of Nicholson. This resulted in a sweep in the first round for Merrick which could have sealed the points for the round. Merrick did seem overly dependent on catching the kicks which meant he was often double over trying to catch them. This left him vulnerable for all manner of strikes such as knees and powerful kicks.

Nicholson seemed to realize this and focused on low kicks throughout the second round. These were harder for Merrick to catch and he made the mistake of doubling over trying to catch them rather than attempting to mitigate damage by checking. Nicholson was able to stop Merrick in the second due to this flaw via low kicks.

Jaime came out of the starting blocks quickly pressuring Haslam across the ropes. He used the pressure to throw powerful 2-1-2 combinations and leg kicks. Haslam did well under the pressure and stayed calm. He did an excellent job of switching up the height of his kicks making it difficult for them to be checked or become predictable.

Haslam began took over in the second tripping Jaime twice. He also demonstrated a good use of the long guard. Haslam would use his long guard to keep his opponent at range then take a step back. As Jamie stepped in Haslam would land a low kick counter. This seemed to bother Jaime and he struggled to deal any meaningful blows to Haslam.

Early in the third Haslam landed an elbow with his opponent against the ropes. Jaime was put on the floor and was unable to get up in time to answers the referee’s call.

Both fighters came out extremely quickly at the start. However Hill seemed a little erratic and less measured than Hussain. Hussain was able to trip Hill three times in the first round and appeared the more settled fighter. Hussain did a good job of moving in on Hill after he had thrown a kick. Not allowing Hill to reset and smothering him in combinations.

Hill seemed to have run out of ideas by the second and was relying primarily on left switch kicks. Hussain continued walking him down with relentless pressure and was able to corner Hill. After a strong flurry from Hussain the referee stepped in to give Hill a standing count. With just a few seconds to go Hill was dropped with a strong hook to the body by Hussain. Hill was able to answer the call and make his way to his corner at the end of the round.

Unfortunately for Hill the writing was on the wall. Early in the third he was caught against the ropes and suffered another body shot. He was unable to recover and the fight was called off.

Both fighters were extremely measured in the opening of the first round. This was Turbill’s first fight for a couple of years and he seemed to want to settle into the fight. Turbill controlled the center used his jabs and teeps to keep Jones under pressure. From the outset Jones focused on using his leg kicks on the lead leg of Turbill. The majority of these were not checked and they did seem to somewhat bother Turbill. He briefly switched to southpaw in an effort to prevent the kicks from landing but Jones was able to land them just as well on Turbill’s rear leg.

From the outset of the second round you could tell that Turbill was putting a lot of effort into defending his front leg. He adopted the traditional light lead leg approach allowing him to more freely check any incoming kicks. This did have it short comings; Turbill was often so determined to block the low kick that he would remain on one leg for long periods of time. This allowed Jones to land his punches more cleanly as Turbill was static on one leg.

Once again thank you to GFC Muay Thai and to all the fighters for putting on an excellent show!