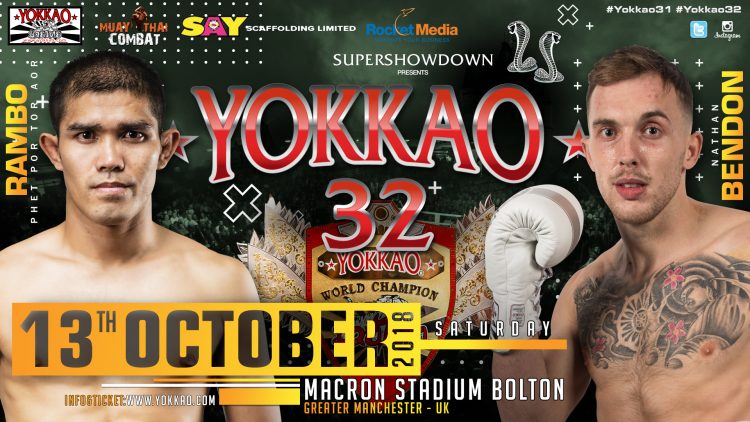 When the time comes, it is evident that one of the most anticipated events in the UK is upon us. With the best fighters flocking, not only from the UK, but from around the world to fight on this show. Brian Calder and the team at Yokkao HQ consistently deliver a fantastic event for fans around the globe.

When you get matched to fight on Yokkao there is one thing that you can pretty much guarantee. It’ll be seen by a few people. With Yokkao’s social media follow totalling around the 1million mark across all their social channels you can be certain that it won’t just be seen by the thousands of people who attend the Bolton Macron Stadium, it will be great for your profile online and for people to see around the world too.

This time around will be no different, with two events in one night, Yokkao 31 & 32 (+ undercard) will be delivering a knockout performance. There have been some changes to the card as the months have developed since March and the events announcement. Most recently, Liam Harrison had to withdraw his place at the top of the bill due to an ongoing injury in his hand.

Top of the bill for Yokkao 32 and one of the most anticipated bouts in an evening of anticipated bouts. The Midlands man and UK number 1, Nathan Bendon will be taking on the fearsome ‘Rambo.’ When asked if the name Rambo instill fear in him, Bendon replied, ‘the name “Rambo” doesn’t scare me in the slightest I know if you have gained the name Rambo in Thailand you are meant to have a bit of an aggressive style which is something I’m very excited about as most will know I like to fight‘

With Bendon taking on Rambo to secure his place on the international stage and with the elite fighters of the world, he said ‘The fact Rambo was matched with one of the best Thai boxers ever produced Liam Harrison just gives me the opportunity to close the gap between me and that elite level, everyone said Chris Shaw would be too much for me… I proved myself then and I will prove myself on the 13th October as well!”

We will see come Saturday who is up to the challenge. Will the Englishman, with the backing of his country be enough to stop the more experienced Thai? Or will Rambo live up to his name and come out swinging?

These two gentlemen were bound to clash sooner or later. Casting back a year or two, Jake was at the top. Now, Joe Craven sits at the top of the rankings and Purdy will be looking to take what he feels is his, ‘I am determined to regain the #1 spot, a lot of people are doubting me, but I have been doubted most of my fights on Yokkao and am still unbeaten in 4 fights at the Macron Stadium.’ Purdy lost in a battle against Ammari Diedrick, who Craven beat at the last outing on Yokkao.

It seems that the 72.5kg spot is a very much sought after spot and Craven will have to hold on tight because, by the sounds of it, people are coming after him, ‘I think its quite befitting to win back the #1 spot on the same show I won it nearly 3 years later, im grateful for the opportunity and am looking forward to showcase myself on the 13th.‘ Purdy commented when asked about how he would feel if he was to take the win this Saturday.

These two gentlemen have been making their way up the ranking recently, doing everything they can to improve themselves and their fight game. Both of the warriors have been putting in the hours in their gyms honing their skillset getting ready for a fight on the big stage. Smith looks in incredible shape, he posted on social media this week his transformation over the last 4 years and it is remarkable.

Forrest seems to be getting about this year. He always seems to be visiting somewhere training with some of the UK’s best, most respected fighters. Most recently a visit to Petchyindee Gym in Thailand to train with Michal Savaas and friend, Dan McGowan.

Both fighters are really wanting to make a name for themselves, with Smith currently being ranked at number 3 and Forrest ranked number 4 (both in their respective weight classes) it is sure to be a dynamite fight that everyone will want to see!

“Craig’s got a bit of hype about him at the moment on yokkao,two good stoppages over previous opponents and an aggressive style that’s entertaining to watch, the win would just cement me even stronger into position as one of the best at 63.5kg-66kg weight category,” says Jack kennedy. Kennedy is no stranger to the Yokkao stage. He fought Singdam on his last outing on the event and put up a fantastic account of himself.

“Singdam was a great learning curve for me and the type of fight I need to push my game to the next level, valuable experience! I’m thankful for having been given the opportunity by Yokkao” Kennedy goes on to say. With all this being said, Coakley has been making a name for himself on the Yokkao stage too!

He made easy work of Myk Estlick on Yokkao 23 and absolutely dismantled Chris Whittle with a first round stoppage on Yokkao 30. So this is going to be a challenge for Kennedy but one he sounds more than ready for!

Niall Brown shot himself to stardom on his first outing on the Yokkao stage when he fought North East based fighter, Robbie Collins. Robbie is known to be tough but Niall came to show the world what he is made of and that he did! Under the tuteledge of Master Sken at MSA in Manchester, the local lad will be coming out to show the world again exactly what he is capable of. This is his second outing on the Yokkao stage and he has been busy preparing alongside, Jack Kennedy, Jacob Smith and Josh Hill.

In Craig Jones’ first experience of the Yokkao ring, he will want to do what Niall did to Robbie. Make a statement. He trains out of the Macclesfield Muay Thai gym in Cheshire. Both of these North-West based fighters will be looking to bring their A-game to the big stage and put their bodies on the line for the entertainment of the fans at the Macron Stadium in Bolton.

Luke Hill has previously experienced what it is like to fight on Yokkao. Fighting Myk Estlick in a 5 round war, he lost this to a majority decision. He made a fantastic account for himself and most definitely earned himself another shot to return to Yokkao and give another one of the UK’s top fighters a run for their money. This time round he gets to test himself against Adam Haslam.

Adam Haslam has been featured on the Yokkao stage before too against Northern King’s Gary Laws. Sustaining a cut early in the fight, Haslam had to bite down on his gumshield and go to war. Lasting the full five rounds and taking the decision in his favour, Haslam will now be returning to the stage against another young man who, both want to make their way into the UK rankings and get on the international stage!

As you can see, this event is delivering yet another spectacle of Muay Thai action. You would be crazy to miss this event. It is always a sell-out and there is a reason why. Bringing over elite level fighters to give the UK’s top a chance to catapult their career career and Bendon will have exactly that opportunity.

Then we have the UK’s most exciting and upcoming fighters, all of whom have a point to prove! Coakley will be looking to take down Kennedy and bring his name further into the limelight on English soil, Purdy wil be looking to reclaim his UK number one spot from the West-Yorkshire based Craven and Simon Forrest will be looking to prove that he hangs with the best in the game.

Whatever the outcomes of the fights, the biggest beneficiary of this whole experience is the crowd and the fight fans around the world who will be lucky enough to see these fighters leave everything in the ring. Putting their bodies on the line after weeks of gruelling training camps and weight cuts.

It is almost upon us. It’s Yokkao week. Who you got?